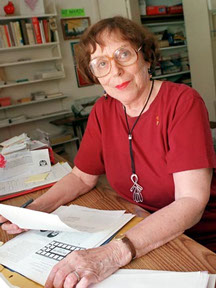 From its first meeting in 1976, it has been an all-volunteer organization of parents, aunts, uncles, grandparents, siblings, cousins, friends and lesbian, gay, bisexual and transgender (LGBT) individuals with one mission: to promote the health and well-being of LGBT persons and their families through support, education, and advocacy.

The story actually began in 1968, when Adele and Larry Starr learned that their 18 year old son Philip was gay after he ran away from home. The family reunited, and the Starrs determined to do whatever they could to learn about homosexuality and help Philip.

Their search for answers led them to Jeanne Manford, who had held the first support group for parents of gay children in New York City in 1973. On a visit to Los Angeles in 1974, Manford encouraged the Starrs to start a similar group. After a few false starts, the first successful meeting of PFLAG Los Angeles was held in the Starr’s Brentwood home on March 8, 1976. The chapter has been meeting ever since following the formula Adele devised for the first meeting: peer support in small groups followed by an educational program.

Adele recognized that support was not enough to help Philip and the other families who came flocking to the meetings. The larger community knew little but myths about homosexual persons and need to be educated. She began speaking at churches and community groups.

Galvanized by the roll back of gay rights legislation in Florida–the infamous Anita Bryant campaign–Adele and her small group of parents marched in the 1977 Gay Pride Parade for the first time, and received the Grand Marshall’s award. Accepting it she said, “This is only the beginning of our fight to save our children from bigotry.”

The advocacy work of PFLAG Los Angeles picked up steam in 1978. Proposition 6, the Briggs Initiative, threatened the teaching jobs of gays, lesbians and those who supported them. In response, a group of 30 PFLAG Los Angeles parents wrote “About Our Children” the first PFLAG publication, to counter a fear-mongering campaign with facts. They printed 175,000 copies and distributed 150,000 to California voters helping to defeat the measure.

In 1979 Adele testified before the Los Angeles City Council in support of the Los Angeles Gay Rights Ordinance, which outlawed discrimination in housing and employment. Although highly controversial, the measure passed by 13 to 2, making Los Angeles the 44th municipality in the country to have such protections.

At the historic LGBT March on Washington in 1979, marking the 10th anniversary of the Stonewall riots and the birth of the gay rights movement, Adele was one of only two parents to speak from the main podium at the Washington Monument. She wowed the crowd declaring: “We parents of gays help one another and our family members to understand, to learn, and to be free from fear. Together, we parents and our children challenge the attitudes that destroy, attitudes that have caused violence, bloodshed and suicide. . .We are silent no longer!!!“

Leaders of other similar parent groups at the March began to contemplate the advantages of having a national federation, giving them a bigger platform for advocacy and a voice in the national political debate about LGBT issues. In 1981 at the Starr home, a meeting of representatives from 20 parent groups came up with articles of incorporation, by-laws, a five member board, and a president for the new organization, now officially called Parents Families and Friends of Lesbians and Gays–PFLAG. That president was Adele Starr.

In her campaign to end ignorance about issues of sexual orientation, Adele also involved the national media. Placing a cold call to Dear Abby, Adele introduced her to PFLAG as a resource for families dealing with homosexuality. Abby gave the organization a plug in her column, and 7500 letters arrived on Adele’s doorstep. She and her cadre of faithful parents and LGBT persons answered every one personally.

Adele was president of PFLAG Los Angeles until 1994. Even after her health confined her to her home, she answered the organization’s helpline, and continued to get regular reports from chapter officers until her death in 2010.

Over the years, the greater Los Angeles area has become home to many chapters from Santa Clarita to South Orange County, and from Westwood to Riverside and Palm Springs  PFLAG Los Angels has grown from one meeting to six, including the traditional Westwood meeting, our Gender Focus Meeting in Hollywood, and four Spanish language meetings in the San Fernando Valley, Boyle Heights, East Los Angeles, and South Los Angeles.

Like Adele, we are active in educating our community with the truth about LGBTQ persons. We now have a Speakers Bureau with more than 30 active members to spread the word at middle and high schools, colleges, businesses and community organizations, reaching over 3,000 people a year. In addition to the Speakers Bureau and the educational programs at our meetings, we use our website and social media to provide resources and information about sexual orientation and gender identity. Our website alone gets over 4,000 page requests a week and receives emails from as far away as Poland and Shanghai. We lobby in Sacramento and Washington, and our voices have been heard in Friend of the Court briefs at the Supreme Court on cases involving marriage equality and religious exemptions. We were active participants in the fight for the Equality act with passed the U.S. House of Representatives in May 2019, but has yet to pass the Senate.

Safe Schools work has become a priority for PFLAG Los Angeles and our sister chapters. To address this problem, PFLAG chapters in Southern California have formed the Safe Schools Initiative enabling us to share ideas, information, and resources to effect real change in schools. Some of the projects include developing a protocol for visits to school superintendents and school boards, finding innovative ways to support Gay/Straight alliances in local schools, and creating curricula to help teachers implement the Fair Education Act, which mandates the teaching of LGBT history in California public schools.

Above all, PFLAG Los Angeles is a safe and welcoming place for all LGBTQ persons and their straight family and friends. When a weeping mother smiles, when a struggling teen finds hope and a voice, when families at odds grow closer together, our mission is fulfilled. As Adele would say, “That’s the miracle.”