A Remembrance of Melanie Woloz

PFLAG Los Angeles lost Melanie Woloz, a friend, a board member and a passionate activist for the LGBTQ community

Melanie began coming to PFLAG Los Angeles meetings in 2013 and became a member in 2014. She came not out of any concern for her gay son, but to support other parents in celebrating their LGBTQ children. When it was her turn to speak, she would say, with a twinkle in her eye, that her son was perfect, and being gay made him even more perfect. Her positivity was infectious and reminded other parents of their LGBTQ children’s gifts.

In 2016 she became a PFLAG Los Angeles Board member. Right from the beginning, Melanie was highly engaged and worked hard to understand our work and our challenges. Initially, she would call me up with a list of questions. I began to ration her to an hour because we could have talked all day. They were good questions, that showed her passion for our work, and helped me to think through our procedures. We continued to have conversations about things like social media, communications, and Models of Pride. I, personally, found her an excellent sounding board and a support in difficult decision making.

She was an amazingly inventive and energetic person. We began to profit from her creative ways of thinking almost immediately. She soon has us packaging our literature, pens, and buttons in shopping bags labeled with out brand to hand out at meetings and conferences. She herself used the labeled bags proudly, and often engaged other shoppers in positive conversations about the LGBTQ community. No task was too small for her. Our meeting room at Westwood Church was hard to find. Melanie replaced our crude arrows with colored, laminated signs, and came early to post them. 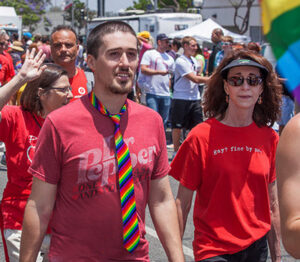 Melanie with her son David marching
in the 2014 L.A. PRIDE parade

In 2018 Melanie became our Speakers Bureau Coordinator, managing our 30-40 engagements a year. It is a detailed job involving communicating with organizations who requested a panel, recruiting our volunteer speakers, and informing participants about meeting details. She also began sending reminders to speakers who were scheduled to speak at our monthly meetings, and following up with thank-you notes. With her formidable organizational skills, she handled it all superbly.

Her deep concern for LGBTQ youth led her to volunteer for our work at Models of Pride (MOP) sponsored by the LA LGBT Center. She became our liaison on the MOP Steering Committee, a job she held for three years until the pandemic. More than an organizer, she helped set up tables, hand out brochures, and talk to parents. She was there from early in the morning until we tiredly packed up our gear at the end of the night.

Melanie and her husband Mike opened their house for a wonderful party at which we introduced potential new board members to our work. Like everything Melanie did, it was elegantly planned and meticulously executed.

Clearly her passing is a major loss for the chapter, but also, personally for me and many other board members. Melanie was full of life and creativity, which she often expressed in her marvelous clothes. I enjoyed her wry sense of humor, her wonderful laugh, and her sharp mind. She became my friend, my ally, and close confidant. The last time we talked we were planning to start a communication subcommittee on Zoom—and speculating about when we could go to lunch. We will all feel her absence acutely.