WITNESSING HISTORY
Our deepest thanks go to Chris Haiss for his wide ranging perspective, his unfailing commitment to our chapter, his deep professionalism as a newsletter editor, and to his courageous journey as a transgender man. This archive is dedicated to him.

And best of all, he saved copies of every newsletter. They are archived here. I invite you to browse through the offerings. These newsletters are the history of PFLAG Los Angeles and the history of LGBTQ life and struggle for the last 20 years. How far we have come.

From the beginning of PFLAG Los Angeles in 1976, the founders knew that communication was a top priority. At the start, those communication tools were simple. In today’s twitter, text, and Instagram world those mimeographed fliers would be considered primitive. As the parents’ support movement grew all over the country, a National PFLAG organization was founded right here in Los Angeles and a regular newsletter was started in December of 1981.

Unfortunately, most of those early publications are lost. Why? Newsletters are ephemeral. They are read and discarded or just discarded. The very few remaining are in the files of the One National Gay and Lesbian Archives.

But in the year 2000, PFLAG Los Angeles was given a great gift. A young transgender man named Chris Haiss, who had started coming to support meetings, took over the job of interim newsletter editor. It is a position he has held for twenty years.

With no experience of writing a newsletter, he created an amazingly rich and interesting product. It included, of course, essential information about PFLAG Los Angeles—our mission, the dates of our support meetings and information about speakers, and our activities in the community. He also advertised events in the LGBTQ community — from performances of the West Coast Singers, to Outfest, the Pride Parade, the Models of Pride Conferences and many more.

He provided book reviews and movie reviews relevant to the LGBTQ community, getting permission from Walter Lippman, a noted critic, to reprint his column. He documented the LGBTQ struggle for civil rights — not only in Los Angeles but throughout the nation and the world.

Notably, he developed a column called TransAction, reporting information crucial for the transgender community, which covered political, medical, and social information relevant to those with transgender and non-binary identities.

BELOW ARE SOME ALTERNATE WAYS OF PRESENTING THE ARCHIVES TABLE PORTION
(there’s still work to be done, but this should give an idea of other formats)

And best of all, he saved copies of every newsletter. They are archived here. I invite you to browse through the offerings. These newsletters are the history of PFLAG Los Angeles and the history of LGBTQ life and struggle for the last 20 years.

How far we have come. 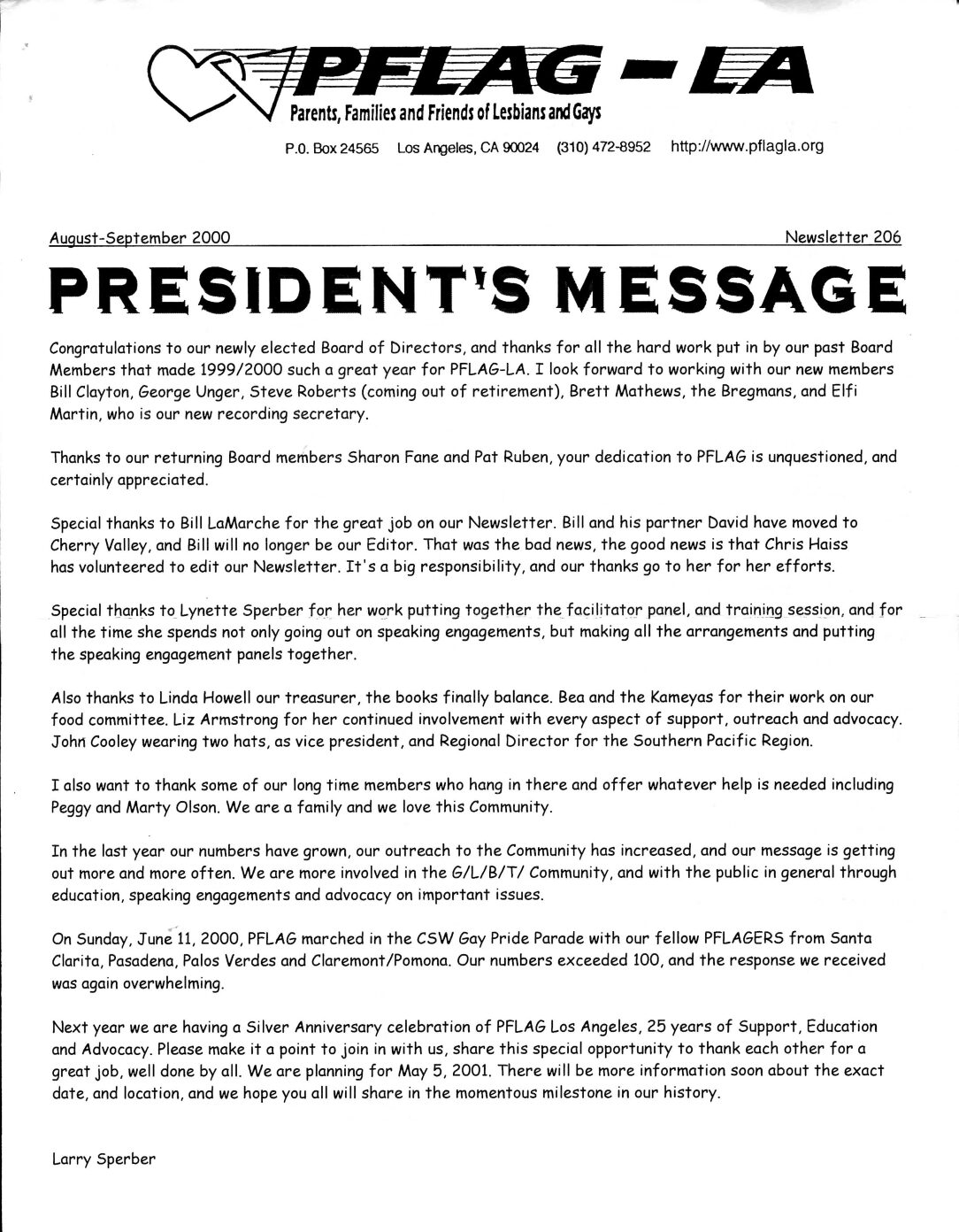